Lore Olympus was such amazing comic! My dear friend Ciara recommended this to me, and once I got around to reading it I couldn’t put it down! I bought the last 2 episodes because I had to know what happened.

I also took screenshots of all my favorite scenes so I could remember them all. LOL

My favorite characters were Hera (I was surprised by how much I liked Hera!), Hermes, and Hecate as a lawyer! I had NO IDEA Hecate would be in it so much, she is one of the more elusive Greek gods that I would like to know more about. It was very cool to see her have a larger role in the story. END_OF_DOCUMENT_TOKEN_TO_BE_REPLACED 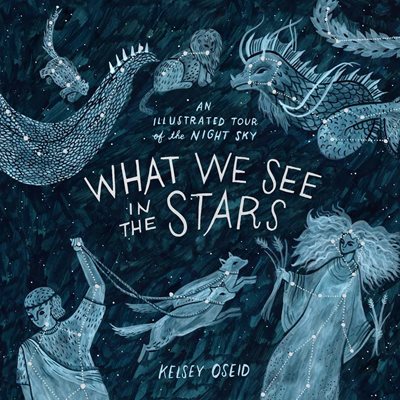 A richly illustrated guide to the myths, histories, and science of the celestial bodies of our solar system, with stories and information about constellations, planets, comets, the northern lights, and more.

Combining art, mythology, and science, What We See in the Stars is a tour of the night sky through more than 100 magical pieces of original art, all accompanied by text that weaves related legends and lore with scientific facts.

This beautifully illustrated book details the night sky’s most brilliant bodies, covering constellations, the moon, and planets, as well as less familiar celestial phenomena like the outer planets, nebulae, and deep space. Even the most educated stargazers and scientists alike will surely learn something new when reading this book!

END_OF_DOCUMENT_TOKEN_TO_BE_REPLACED

The sequel to Roshani Chokshi’s debut novel The Star-Touched Queen remains equally adventurous as the first, transporting the reader to the far-away otherworldly lands of Bharata & Ujijain, Alaka and beyond, this time following Mayavati’s younger sister Gauri on her own journey of self-reflection and self-discovery. Filled with adventure, politics, friendships, sisterhood, romance, illusion, transformation, sacrifices, trials and tribulations, A Crown of Wishes weaves an otherworldly story, carried on the wings of birds with feathers of glittering gold.

In A Crown of Wishes we find Gauri, the legendary warrior princess of Bharata, exiled and imprisoned in Ujijain at her brother Skanda’s command. Scorned by her people for the lies Skanda has spread, Gauri faces execution in Ujijain. But Vikram, the cunning ‘Fox Prince’ of Ujijain, sees her potential and offers Gauri a chance at redemption. Together, they enter the Tournament of Wishes with hopes of winning a wish from The Lord of Treasures that would secure them their greatest desires. END_OF_DOCUMENT_TOKEN_TO_BE_REPLACED