Tarot cards have been used throughout the ages for gaming and fortune-telling, but their symbolism suggests their deeper purpose may be to gain insight into the human mind and enhance personal development. Some read fortunes to gain insight into the future, but I believe tarot provides much more insight into the reader. The cards provide us with excellent advice at any juncture and, if taken to heart, can help us to understand ourselves better and plan how to live better in the future. 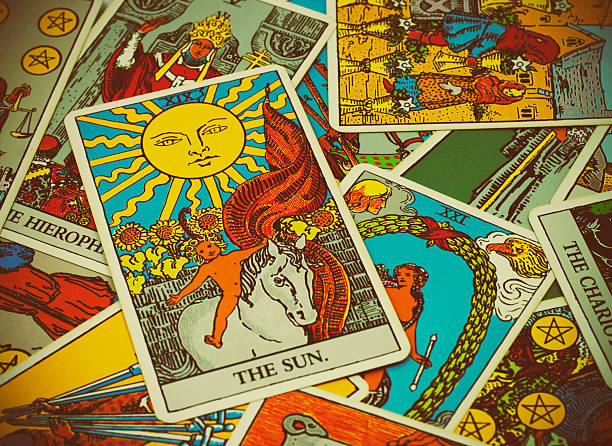 “Tarot cards … can serve as an advisor and help in widening the users’ vision. Tarot cards are deemed as a map of life, or a signpost, to tell you how to lead a good and correct life.”    –Royal Thai Tarot, Sungkom Horharin

I thought it would be fun to compare tarot cards to book covers, and I found some really great similarities! I tried to find titles that match in content and cover, and for some cards I found multiple books that would work. Leave a comment with the books you would choose for these cards!

The Fool represents a youth setting out on a path of discovery. Like the Fool, Alice strides towards a precipice and skips into the unknown. Alice begins her adventures when she follows the frantically delayed White Rabbit down a hole into the magical world of Wonderland, where she meets a variety of wonderful creatures. Throughout her fantastic journeys, Alice retains her reason, humor, and sense of justice. She has become one of the great characters of imaginative literature, but the story and the card offer some advice: look before you leap.

I mean, obviously.  Traditionally, The Magician is one who can demonstrate hands-on magic — as in healing, transformative rituals, alchemical transmutations, bringing the magical to every aspect of life. A modern Magician is any person who completes the circuit between heaven and Earth; one who seeks to reveal hidden knowledge and bring forth the divine light within themselves. With all of the drama that happens in the course of seven novels, The Harry Potter Saga is a perfect representation of the Magician’s confidence, action, and ability to change.

The High Priestess is a card of insight, wisdom, and integrity, all of the characteristics which Emma strives to embody. The open book in her lap is a symbol of learning while the pillars surrounding her stand for duality. The Empress herself is a wise counselor, much like Emma who seeks to guide with her matchmaking: people flock to her for guidance in making major decisions.

Little Women by Louisa May Alcott

Marmee (or Margaret March) is the core of her family, managing the household by herself while her husband is away, helping war efforts, and teaching her daughters — by example — how to grow into smart, strong, and kind women. Even though Little Women rejects traditional feminine roles, Marmee is a perfect representation of The Empress, the maternal card of domestic comfort and security.

A Game Of Thrones (series) by George R. R. Martin

The epic Game of Thrones books bring together adventure and fantasy as we follow the fight to be the King of the Seven Kingdoms. The Kingdoms need a strong, logical ruler like the Emperor card depicts. But this story is like getting a reversed reading of this card, and instead of strong leadership we see complete chaos. The show suggests that by the end we will see a strong leader in Bran, but until Winds of Winter, who knows!

The Alchemist by Paulo Coelho

In the Alchemist, the Hierophant is the shepherd on a quest to find great treasure. Along the way he meets many spiritual messengers and learns many great lessons which are the treasure, in the end. The Hierophant signifies religion, instruction, and wisdom. He is a learner, a knowledge-seeker and traveler, just like Santiago.

Pride and Prejudice by Jane Austen

The Lovers card reflects the challenges of choosing a partner, making commitments and compromises. This card advises that you study your options and make the wisest choice, like Lizzy in Pride and Prejudice. Instead of accepting her first offer of marriage, she resists taking the easy-way-out and finds real romance with Darcy in the end! Yay!

The Chariot epitomizes movement and travel, and who is a better model than the mysterious Gatsby? The ambitious Charioteer travels light and stays open to fresh experiences, but is determined to keep moving forward towards his goals. Gastby, a man who has been around the world and made a great fortune for himself, seems to have it all. But he will stop at nothing until he gets the one true object of his affection. The Great Gatsby explores themes of decadence, idealism, resistance to change, social upheaval, and excess, creating a cautionary tale regarding the American Dream.

The Lion, the Witch and the Wardrobe by C. S. Lewis

The Chronicles of Narnia: the land beyond the wardrobe, the secret country known only to Peter, Susan, Edmund, and Lucy – the place where the adventure begins. While the lion is a symbol of great strength, it is also a symbol of great danger. The woman handling the lion in the card shows vulnerability, and suggests gentle, calm control of inner conflict (if you wrestle with a lion, you may get bit!)

Henry David Thoreau spends two years at Walden Pond in solitude, a perfect representation of The Hermit: a solitary traveler on a quest with only the light of his lantern to guide him through the darkness of night. Thoreau and the Hermit reminds us that the truth of existence is to be found within ourselves.

X – The Wheel of Fortune

The Odyssey by Homer

The Odyssey is one of literature’s grandest journeys. Odysseus’ reliance on his wit and wiliness for survival during his ten-year voyage home to Ithaca after the Trojan War is at once a timeless human story and an individual test of moral endurance. This is like the Wheel of Fortune which represents a crossroads in your journey.

The Handmaids Tale by Margaret Atwood

This book explores the issues of female rights, religion, and individual liberties by exploring the consequences of their removal from society. The Justice card, on the other hand, represents everything that is lost in The Handmaids Tale: balance, fairness, and equality.

*In Tarot, cards can be read upright or reversed. The Handmaids Tale would definitively be a reversed reading, representing the miscarriage of justice.

Things Fall Apart follows Okonkwo, a “strong man” of an Ibo village in Nigeria as he tries to come to terms with the changing world around him. Like The Hanged Man, this story provides us with a powerful fable about the immemorial conflict between the individual and society. Okonkwo’s refusal to change brings about conflict and he ultimately meets his fate.

The Book Thief by Marcus Zusack

This novel is narrated by death, making it a perfect choice for this card. Death symbolizes a rebirth, or the ending of a cycle: “With every closed door a window opens”.

*There are endless options when it comes to choosing a Tarot deck, and artists are creating more now than ever before. The reference cards I used for this post are all from the classic Rider-Waite deck, except for the Death card, which is from the Renaissance deck.

House of Spirits by Isabel Allende

A House Of Spirits paints a wonderful portrait of a family spanning over several generations. Allende depicts love, betrayal, vengeance, and ambition in a country torn apart, but offers possible salvation in the prospects of the female bloodline. The Matriarch Clara possesses the powers of clairvoyance and telekinesis; spirits visit her house in abundance. Like the angel in the Temperance card, Clara balances between the conscious and unconscious mind, foretelling fortunes of the future generations.

In the 31 letters which constitute the book, Screwtape gives Wormwood detailed advice on various methods of undermining God’s words and of promoting abandonment of God. In Screwtape’s advice, selfish gain and power are seen as the only good, and demons cannot comprehend God’s love for man or acknowledge human virtue. Similarly, The Devil arouses temptation in the pair chained together, challenging them to look deeper within themselves. Can they resist The Devils influence?

Romeo and Juliet by William Shakespeare

You may have seen The Lovers card and thought “what about Romeo and Juliet?” This play may be about two lovers on the surface, but there is great tumult that tears them apart (very much like the destruction of the tower). Shakespeare’s timeless play of young love and untimely death is much more indicative of The Tower, which represents the destruction and collapse of what one holds dear.

Miller’s novel gives us a deeper glimpse into the life of this popular witch: her lonely childhood among the gods, her first encounter with mortals, the awakening of her powers, and her hopeless romance. The Star Tarot card is about reconnecting one’s soul with the divine — the transcending of personality, family, community, and reputation. Circe is a good example of this and by the end of the novel is reborn like the water flowing from the cup.

The Call Of The Wild by Jack London

Based on London’s experiences as a gold prospector in the Canadian wilderness and his ideas about nature and the struggle for existence, The Call of the Wild is a tale about unbreakable spirit and the fight for survival in the frozen Alaskan Klondike. The Moon symbolizes solitude and the conclusion of a journey, much like the novel.

Half of a Yellow Sun by Chimamanda Ngozi Adichie

Half of a Yellow Sun is a remarkable novel about moral responsibility, about the end of colonialism, about ethnic allegiances, about class and race—and the ways in which love can complicate them all. The Sun card advises you to have confidence in your natural divinity, which goes perfectly with this story.

The Trial by Franx Kafka

The Judgement card the Judgment Tarot card points to freedom from inner conflicts and counsels you to trust the process of opening up. The Trial is the terrifying tale of Josef K., a respectable bank officer who is suddenly and inexplicably arrested and must defend himself against a charge about which he can get no information. Whether read as an existential tale, a parable, or a prophecy of the excesses of modern bureaucracy wedded to the madness of totalitarianism, The Trial has resonated with chilling truth for generations of readers.

The Neverending Story by Michael Ende

Its special story within a story: Sneaking away with a book called “The Neverending Story,” Bastian begins reading it in the school attic. The novel is about Fantasia, a fantasy land threatened by “The Nothing,” a darkness that destroys everything it touches. The kingdom needs the help of a human child to survive. When Bastian reads a description of himself in the book, he begins to wonder if Fantasia is real and needs him to survive. As he is drawn deeper into Fantastica, he must find the courage to face unspeakable foes and the mysteries of his own heart. Like The World card, which is all about cycles, The Neverending Story is all about endings and beginnings.