For years I have been out-of-the-loop. I never watched a single episode of Game of Thrones, nor picked up even one single copy of the books. I didn’t understand the obsession with The Known World of Westeros, didn’t join in the gossip, and definitely didn’t ‘get’ the memes. I was an outsider. I know, I am late to the party. But better late than never, right?

Before Christmas, a friend brought it up, and (again) recommended I watch the series. Later that week, I was gifted the password to the family HBO account. And thus my obsession began. I binged the series in three or four days, and went back again to re-watch everything more carefully. I loved the costumes, the mythology and house history, and of course, the plot twists. And once I was sucked in, I couldn’t pull away. Next, I had to read the books. And once I started reading them, I could not put them down! I couldn’t believe what I had been missing out on.

George R.R. Martin is an amazing author. The GoT universe he has created has an incredible amount of historical references, and has even more unique fictional personalities. Each character has their own distinct facets, like gemstones, each a different treasure.

Daenerys’ development from lost exile to proud, strong, fierce queen is a favorite of both book and show. The Mother of dragons, breaker of chains, Khaleesi of the Great Grass Sea, she has learned from her weaknesses and turned them into strength. Arya defies stereotypical gender norms completely. Described as unladylike and unkempt, Arya struggles with her identity. In a way, she must lose herself to find herself. Hardened by life, she epitomizes the feminist who learnt her way around a man’s world by way of lack of personal ‘femininity’. And Tyrion truly is the male feminist on the show, who also regularly reminds us of the power of knowledge.

While Game of Thrones is not at all perfect in its examination of female empowerment, it provides plenty of rich material to consider. The first step to winning any battle is acknowledging that there is a battle to be fought. A Song of Ice and Fire author George R.R. Martin recognizes this. In a 2013 interview with The Telegraph, he said of his work:

“There was a period in my life when I would have called myself a feminist“.

‘I believe in painting in shades of grey. All of the characters should be flawed; they should all have good and bad, because that’s what I see. Yes, it’s fantasy, but the characters still need to be real. […]

To me being a feminist is about treating men and women the same,’ he said. ‘I regard men and women as all human – yes there are differences, but many of those differences are created by the culture that we live in, whether it’s the medieval culture of Westeros, or 21st century western culture.’

It is no wonder then, that Martin has written so many strong female characters into the books. Dangerous Women, an anthology of short stories “from some of the biggest authors in the science fiction/fantasy field”, features Martin as a contributing editor, evidence of his respectful reverence for the Strong Female. (While Martin is not directly affected by the issues that women — from cis to transgender, and all of the non-binary points in between — face, he is mindful of them, and incorporates the consequences of sexism and misogyny into his work.)

As the series goes on, the show diverges further and further from the books. While Season 1 and 2 mostly covered the first two books, “Game of Thrones” and “A Clash of Kings.” The third and fourth seasons track (approximately) with the third book, “A Storm of Swords.” The show has also taken material from the next two books, “A Feast For Crows” and “A Dance With Dragons.

Readers first were warned by George R.R. Martin himself that the upcoming round of episodes would veer away from his source material, thanks to the show catching up with certain story lines, and surpassing some in other cases.

The Game of Thrones series’s storyline closely follows the story of George R.R. Martin’s A Song of Ice and Fire novels, but there are still some differences between books and series, especially in recent seasons.

The show has made the books so alive that reading them is now like playing the entire show in your head but with a lot of extra scenes that never made it to the show. Where one may watch a scene and wonder what is happening inside the character’s head but a person who has read the book knows it; one of the joys of reading the books. 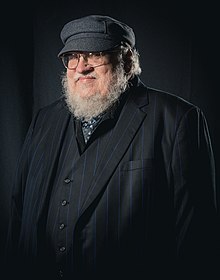 Born in 1948, fantasy writer George R. R. Martin grew up in Bayonne, New Jersey. He developed a love for writing early on. His first novel, Dying of the Light, debuted in 1977. In 1996, he published his first installment of the A Song of Ice and Fire series. Martin became a best-selling author in 2005 with the fourth title A Feast for Crows and again in 2011 with the fifth A Dance with Dragons.

To read more about George R.R. Martin and the Game of Thrones universe, visit http://www.georgerrmartin.com/.

One thought on “Game Of Thrones”