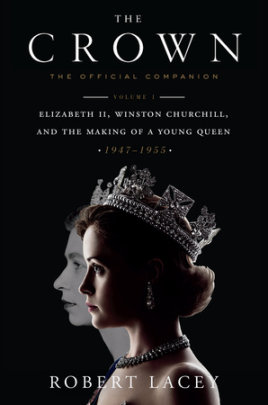 This book is the official companion to the Emmy-winning Netflix drama chronicling the reign of Queen Elizabeth II, and starring Claire Foy and John Lithgow, The Crown by Peter Morgan, featuring additional historical background and beautifully reproduced archival photos and show stills.

Elizabeth Mountbatten never expected her father to die so suddenly, so young, leaving her with a throne to fill and a global institution to govern. Crowned at twenty-five, she was already a wife and mother as she began her journey towards becoming a queen. As Britain lifted itself out of the shadow of war, the new monarch faced her own challenges. Her mother doubted her marriage; her uncle-in-exile derided her abilities; her husband resented the sacrifice of his career and family name; and her rebellious sister embarked on a love affair that threatened the centuries-old links between the Church and the Crown. This is the story of how Elizabeth II drew on every ounce of resolve to ensure that the Crown always came out on top.

The Netflix Original series itself does interesting things with cinematography, creating new depth in ways that the book cannot achieve by way of written word. The visual depictions provides the audience with a real idea of what it actually took for Elizabeth to present herself as a Queen – a struggle which becomes emphasized, real, and relatable once watching the series itself.

What’s great about this book is that it provides the reader with the images that can only be compared side-by-side. The reenacted show did a fantastic job staying true to the history of the Queen’s life. From the actors to the set design, the show does a lot to ensure historical accuracy. But there is still no comparison for the real photos of the Queen herself, which are printed in full-color and side-by-side stills from the series within the book.

The book and the series work really well in conjunction. They fill in the spaces of the other – where the show cannot explain every detail of the full story, the book can. This book is great for anyone who loved the Netflix series and wants to know more about The Queen!

*I received this book for free from Blogging For Books in exchange for a review.

** Edit: This review is currently in progress, and will be updated with a more in-depth look. Check back soon for the final draft.

Written by the show’s historical consultant, royal biographer Robert Lacey, and filled with beautifully reproduced archival photos and show stills, The Crown: The Official Companion: Volume 1 adds expert and in-depth detail to the events of the series, painting an intimate portrait of life inside Buckingham Palace and 10 Downing Street. Here is Elizabeth II as we’ve never seen her before.

Robert Lacey is a British historian noted for his original research, which gets him close to – and often living alongside – his subjects. He is the author of numerous international bestsellers. After writing his first works of historical biography, Robert, Earl of Essex and Sir Walter Raleigh, Robert wrote Majesty, his pioneering biography of Queen Elizabeth II. Published in 1977, Majesty remains acknowledged as the definitive study of British monarchy – a subject on which the author continues to write and lecture around the world, appearing regularly on ABC’s Good Morning America and on CNN’s Larry King Live. Find out more at http://www.robertlacey.com/.

One thought on “The Crown”