The Languge Of Thorns is a collection short stories and prequels included in the triologies and duologies by Leigh Bardugo that function as childhood fairy tales and folklore to the characters of The Grishaverse.

Inspired by myth, fairy tale, and folklore, #1 New York Times-bestselling author Leigh Bardugo has crafted a deliciously atmospheric collection of illustrated stories filled with betrayals, revenge, sacrifice, and love. Travel to a world of dark bargains struck by moonlight, of haunted towns and hungry woods, of talking beasts and gingerbread golems, where a young mermaid’s voice can summon deadly storms and where a river might do a lovestruck boy’s bidding but only for a terrible price.

Inspired by myth, fairy tale, and folklore, #1 New York Times-bestselling author Leigh Bardugo has crafted a deliciously atmospheric collection of short stories filled with betrayals, revenge, sacrifice, and love. This collection of six stories includes three brand-new tales, all of them lavishly illustrated with art that changes with each turn of the page, culminating in six stunning full-spread illustrations as rich in detail as the stories themselves.

For those who do not know (as I did not), The Grishaverse are the mythical lands from Bardugo’s Shadow & Bone trilogy, as well as the follow-up Six Of Crows duology. Below is an illustrated map, and through the website you can engage in quizzes and learn more about the characters in each land. 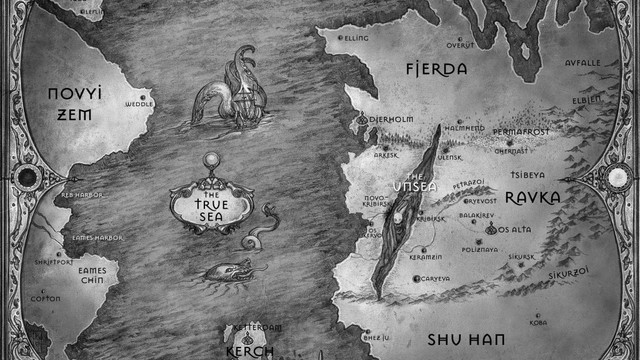 The Language of Thorns was published most recently and does not fit in the narrative timeline of the other stories. These are the fairy tales and folk stories Leigh’s characters would have heard growing up, so you can pick it up at any point in your Grishaverse journey. For readers who have never read Bardugo, this is a great place to begin a journey into the Grishaverse, and for long-time fans of Bardugo, this pairs nicely with the established novels, and provides insights into the culture and minds of the characters.

Bardugo mentions in the Authors Note that the collection began when her publisher asked for a prequel to Shadow and Bone. Inspired by “Hansel and Gretel”, Bardugo imagined a prequel that tells readers a fairy tale from the character’s childhoods rather than a ‘pre-situation’ involving the characters. With each book, Bardugo re-imagines and retells classic fairy tales, with a twist: The Velveteen Rabbit, Ursula, and Hansel and Gretel are just some sources of her inspiration.

The tales quickly engage readers, reminiscent of age-old fairy tales and folklore. They quickly shift though, into something new, unrecognizable, and enchanting. Tales with a twist. Nearly every page is illustrated by the talented Sara Kipin. Perfect for new readers and dedicated fans, these tales will transport you to lands both familiar and strange—to a fully realized world of dangerous magic that millions have visited through the novels of the Grishaverse.

Leigh Bardugo is a #1 New York Times bestselling author of fantasy novels and the creator of the Grishaverse. With over one million copies sold, her Grishaverse spans the Shadow and Bone Trilogy, the Six of Crows Duology, and The Language of Thorns— with more to come. Her short stories can be found in multiple anthologies, including The Best of Tor.com and the Best American Science Fiction & Fantasy. Her other works include Wonder Woman: Warbringer, and the forthcoming Ninth House. Leigh was born in Jerusalem, grew up in Southern California, graduated from Yale University, and has worked in advertising, journalism, and even makeup and special effects.