Despite the rumors, Renée Ahdieh‘s long anticipated Flame In The Mist is more likely inspired by the story of Mulan rather than existing as a retelling of the tale. Many elements seem to echo the popular Disney’s Mulan cartoon (she cuts off her hair, saves the life of an important warrior, and lives a secret double life as a man), including one of the important quotes of the book: “Be as swift as the wind. As silent as the forest. As fierce as the fire. As unshakable as the mountain.” (143)

Similar to Wrath And The Dawn, Flame In The Mist begins with arranged marriage. Control is a large theme of the novel: Mariko feels “locked in a cage” (20). Torn between a duty to marry and a desire to have control over her own life, Mariko must make difficult choices in order to find her place. She wants to be more useful than the quiet life she is obligated to assume. The Black Clan gives her this opportunity. 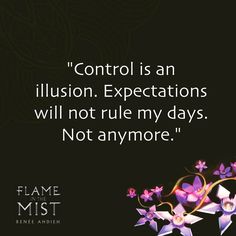 “She’d wanted her body to be her own. The decision to be hers and hers alone. Her body was not for sale. It did not belong to her parents to sell to the highest bidder. Nor did it belong to Minamoto Raiden or to any other man. She was not half. She was wholly her own.” (197)

The few other females in the story provide insight into the role women play within the culture of the novel. Mariko’s mother grants us a glimpse at the typical wife. Her stiffly rigid and unquestioning character generalizes the expectation that a women quietly follows her husbands wishes. Okami’s sister Yumi however, is a female character similar to Mariko: “The young woman did not stand or move from a place of subservience. Nor did she convey any sense that her existence was based solely on the whims of men. Her head was high, her gait proud. This young woman was not a plaything (208).” Yumi is a strong female like Mariko, who imparts wisdom that makes Mariko realize the power of being a woman. She explains that “being a woman is a challenge I must fight. Like being born under a stormy sky.” (346)

“There is such strength in being a woman. But this is a strength you must choose for yourself. No one can choose it for you. We can bend the wind to our ear if we would only try.” (347)

This book challenges the expectation that females should be a certain way, removing the connotations of demure, gentle, or sensitive. Through the main character Mariko, the author provides an example for young girls to follow proudly. You are not just a body. You have a voice and a brain, and can use them to your advantage.

Ultimately, Mariko finds herself through struggle in the forest. Rising to her challenges, she embraces the freedom that comes with becoming a kagemusha.

The Bushido principles that Samurai value stand in contrast to the tennents laid out before Mariko as she swears her life to being a kagemusha, a shadow warrior for the Black Clan. Whereas Bushido values courage, integrity, benevolence, respect, honesty, honor, and loyalty, the kagemusha “fight for justice irrespective of Honor, […] see all those before you as equal, regardless of birth or rank, [and are willing to use] all manner of subterfuge – even lying, cheating, stealing” (356) to achieve goals and protect secrets. Mariko finds freedom in the values of the Black Clan, and begins to see the oppressive the differences that separate Samurai from Kagemusha. “The Black Clan had welcomed her. Not a single one of them had turned their back on her, though they all knew who she was. What she had done.” (358) Mariko feels useful, respected, listened to amongst the Black Clan, and ultimately chooses freedom over duty.

“She fought back — with both words and strength of conviction — as no girl ever had in his experience.” (279)

The challenges that Mariko faces shape her and help her to grow into the powerful warrior she becomes. She must constantly fight to prove herself. To prove that she is not worthless. To herself, and to the clan. Her persistence and intellect help her to embrace her experiences, no matter how costly, and her dedication to doing the right thing guides her honorably. Mariko grows from a sheltered girl into a powerful warrior, in control of her own destiny.

Mariko grows into a truly strong YA heroine in this book. Not only is she intelligent and open-minded to true learning and listening, she is often able to separate logic from feeling and act in a logical way that many readers respect.

A general concencus among readers seems to be that the book starts slow. For me, it took nearly the first hundred pages to really capture my heart. Because I loved Wrath And The Dawn so much, I kept reading, and am so glad that I did. The love story becomes truly engrossing, and I cannot wait to find out what happens in the next book. The sequel to Flame In The Mist is set to be released in May of 2018.

Renée Ahdieh is a graduate of the University of North Carolina at Chapel Hill. Renee Ahdieh is an author of several Fantasy novels, notablyThe Wrath and the Dawn Dualogy.To learn more, visit her website: http://www.reneeahdieh.com/about-renee/.

4 thoughts on “Renee Ahdieh, Flame In The Mist”